We are in the Appalachian Mountain chain, one of the oldest on the planet. After millions of years of erosion, we have only the tiniest bit of soil before we hit shale and then bedrock. So pots it is…….

I use netting (bridal veil netting fabric sewn into a large circle) over the plants to keep the bugs at bay until they are strong enough to survive. Our garden is closely and totally surrounded by acres of mountain woods, containing millions of insects of all shapes and sizes and certainly many are hungry for a snack at my ‘salad bar’.

Following are some photos of our past and present vegetable gardens.
Some are from the big garden over at our old round cabin. The rest are from our house (through the woods and across the hollow from our old round cabin) where last year we grew eggplant in pots and cukes and squash in buckets on a trellis (on our deck) and tomatoes, peppers, broccoli, lettuce and herbs in pots & buckets (in the front yard).

This season, in the front yard, we grew cherry tomatoes in the ground (they were volunteers from last years pots), beans in pots, cukes in buckets growing up on the trellis and herbs in both pots & buckets. After a huge pickling- cuke harvest, now those cucumber buckets have gone over (August 7th) to fall Wando English climbing peas,

This season we turned our deck over to growing lettuce, pak-choi, baby eggplant, one pepper and 1 pickling cuke to the hydroponic grow experiment. I will be growing almost the same things, the same way and locations next season. Make sure to see the latest posts and small movies of this year’s hydroponics grow on the deck, elsewhere in this blog, as it was a wonderful and productive success.

The seedlings under the lights. The only place to put them is the bedroom- the lights come on at 5:30AM and shutoff at 9:30PM. 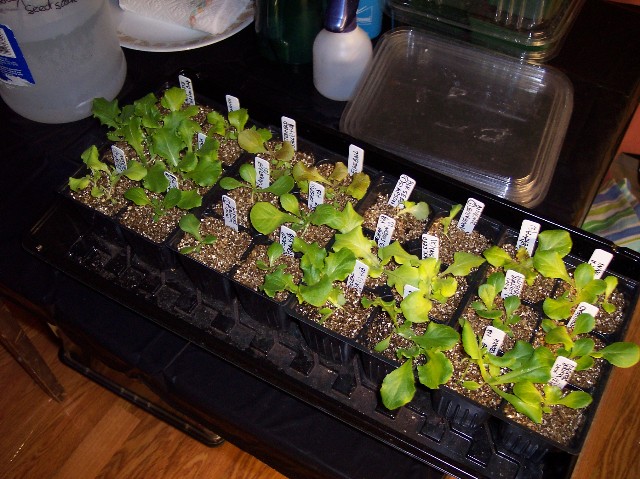 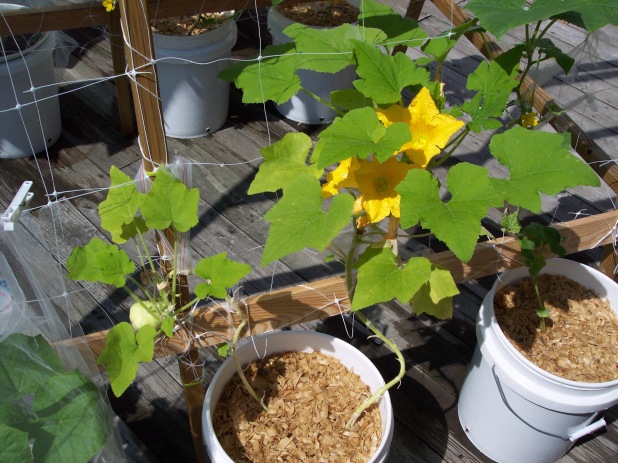 Patty pan squash growing well in buckets on trellis. The mulch is Aspen shavings. I get it in very large bales at the large chain pet stores- (an unopened bale just barely fits in a 35 gallon trashcan). It is sold as animal bedding. As plant mulch it holds a perfect amount of moisture, it doesn’t seem to rob the plant of nitrogen like other wood shavings do, it has no toxic resins like pine or cedar and it decomposes very well at the end of the season when mixed with the old soil and composted.

Indeterminate tomatoes on tarp covered wood pallets. Later in the season, another 3 foot section of fencing circle had to be attached at the top, as the tomatoes filled the cages width wise, then climbed to a bushy 7 ft. Instead of mulch in the big pots, I cut large circles of landscape fabric with a hole cut in the middle for the plant. This solved the problem of chipmunks digging in the soil and also the light grey reflected light so the soil didn’t heat up. Another benefit was that soil digging insects didn’t dig and lay eggs in the soil. The green stakes through the round cages come through from all directions to help hold up stems until the plant fills the cage. The stakes come in and out and up as needed, as the plant grows taller. 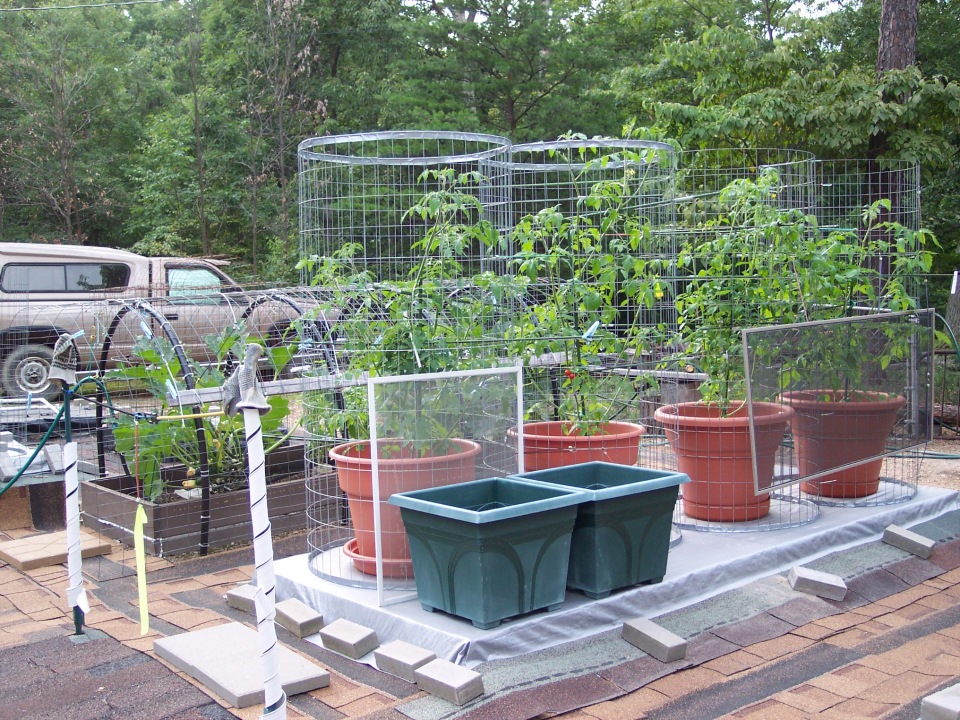 Indeterminate cherry and grape tomatoes. Although they filled the cages width-wise, they were more manageable at the top. I used discarded window screens to block the sun from the pots so the soil didn’t get too warm and at the top as well. 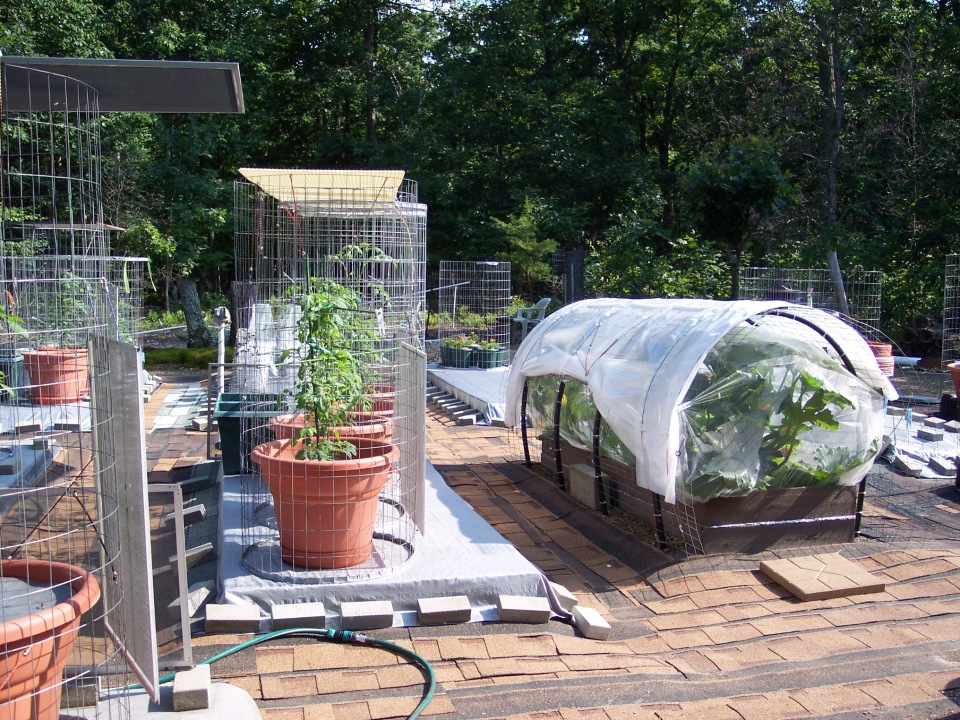 Zucchini in an in ground bed. Cover made from fence wire and discarded (thick) well water pipe. The pipe bends relatively easily and hold shape when stuck into he ground a few inches and zip-tied to the fencing. The zucchini stayed within netting until it had many flowers that needed to be pollinated. The green garden stakes through the fence cage (just like the ones through the tomato cages), are to help hold up the large leaves and stems and can be moved around easily. 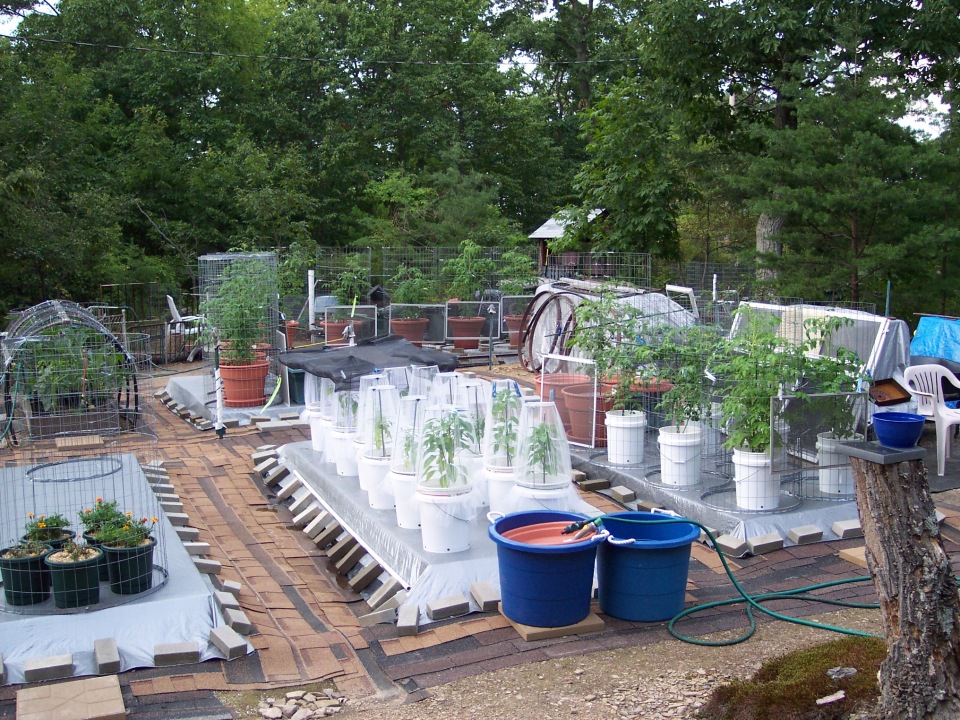 The bridal veil netting is for insect protection, the cages are because the garden is in the middle of 20 acres of forest, the used shingles are for the weeds and the bricks hold down the tarps that cover the wooden pallets that the pots sit on.

On top of the tomato cages on the left, are discarded plastic grids that were originally used as light diffusers on ceiling fluorescent lights in an office building. They blocked just the right amount of light so the tomatoes didn’t cook at noon. On other plants, I used discarded sliding door screens on top of the round cages or at the sides. Since the zucchini was watered by drip irrigation, when it rained I covered it with that black plastic on top of the cage. By keeping rain off the leaves, it helped a great deal in fighting the scourge of all squash & cukes- powdery / downy mildew viruses as well as other rots. 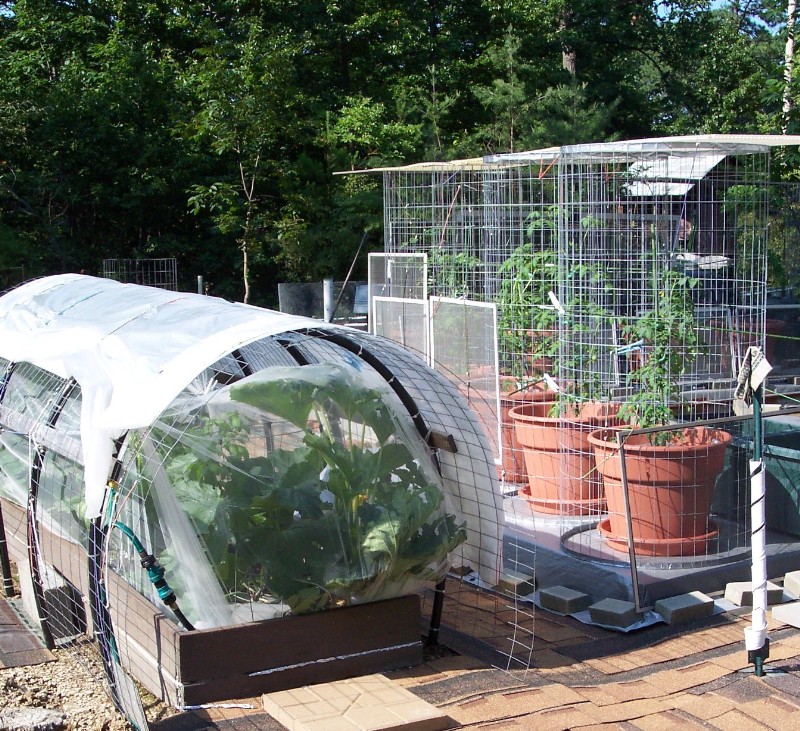 The zucchini was watered with a drip hose (coming in at the left corner of the bed sides). Discarded window screens were clipped to the tomato cages (with clothespins etc.) and moved around as needed to block sun to the pots and also put on the cage tops. 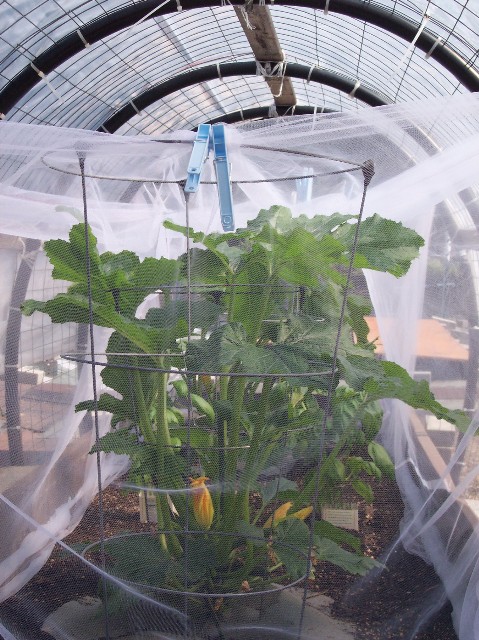 Zucchini still in netting (clipped w/clothespins to cages) and starting to get male flowers.

Banana Peppers in 5 gal buckets covered with bridal veil netting, over tomato cages that are turned UPSIDE DOWN with the legs cut off and sharp edges taped with rubber electrical tape. Clothespins clipped to the top of the cage but INSIDE the netting gave the pepper’s leaves and flowers more room to grow width-wise. The pepper is self-pollinating and can live it’s whole life producing it’s flowers and peppers in this protected environment (as long as the pepper plant size fits the netting cover you sew). 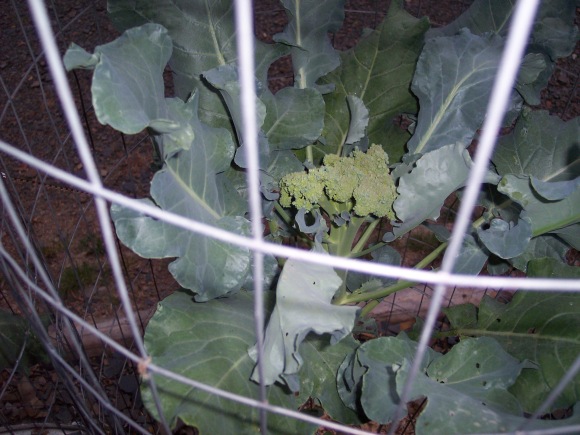 Mature basil and young peppers growing in 5 gal buckets, broccoli in back of photo

Basil just starting to grow. Each bucket has a tight group of 5 basil plants. 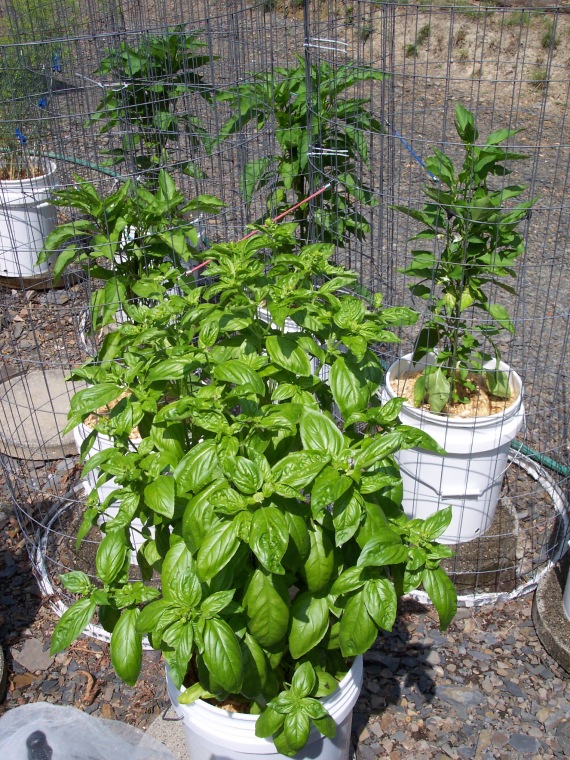 Basil in front and flowering peppers behind

Cucumbers growing in 5 gal buckets starting to climb on trellis, (they are no longer grown on the deck as the last 2 years they grew here in the front yard). Eventually they got Aspen shaving mulch. The netting for each has come off (necessary once the plant flowers-for pollination), but the upside down round tomato cages still sit on each bucket to help support each plant so it can become well attached to the plastic trellis. (The legs of the small tomato cage were cut off- where the legs were, is now the TOP of the cage- shown with blobs of black RUBBER electrical tape, to stop the sharp cut edges from damaging the netting. The largest circle of the cage- if you get the right size of tomato cage to begin with- fits perfectly over the top edge of the bucket and rests on the lip below it. These cages are in their 5th year with virtually no damage. They stack great, even better than tomato cages with legs do, for easy storage in the winter.)

Cucumbers on trellis in front yard, here just making the big climb, but gone over by Aug 7th to direct seeding climbing Fall peas (‘Wando’ variety… as these can take the heat as they sprout and grow, before they mature later in cooler September). I used the same buckets for the peas that the cucumbers had been in, after putting all the soil into the wheel barrel and removing the cuke’s roots as best as possible. I re-filled the buckets after mixing together: the Aspen shavings mulch that had covered the cukes; the soil the cukes were in; some leaf compost; and some osmocote fertilizer.

Pickling cucumbers when they were growing on the deck. They were direct seeded in 5 gal buckets, to grow up the plastic netting and wood frame trellis on the deck.

My favorite varieties of pickling cukes have turned out to be ‘Homemade Pickles’, ‘H-19 Little Leaf’, ‘Jackson Classic’ and ‘Diamant’.

Baby eggplant seedlings (‘Hansel’, ‘Gretel’ and ‘Fairy Tale’) were direct seeded in the large square white pots. Eventually, when the plants were too wide for the netting, the net covers came off but the tomato cages (legs shortened and stuck in the soil), stayed on, in order to help support the 2 ft+ eggplant plants.